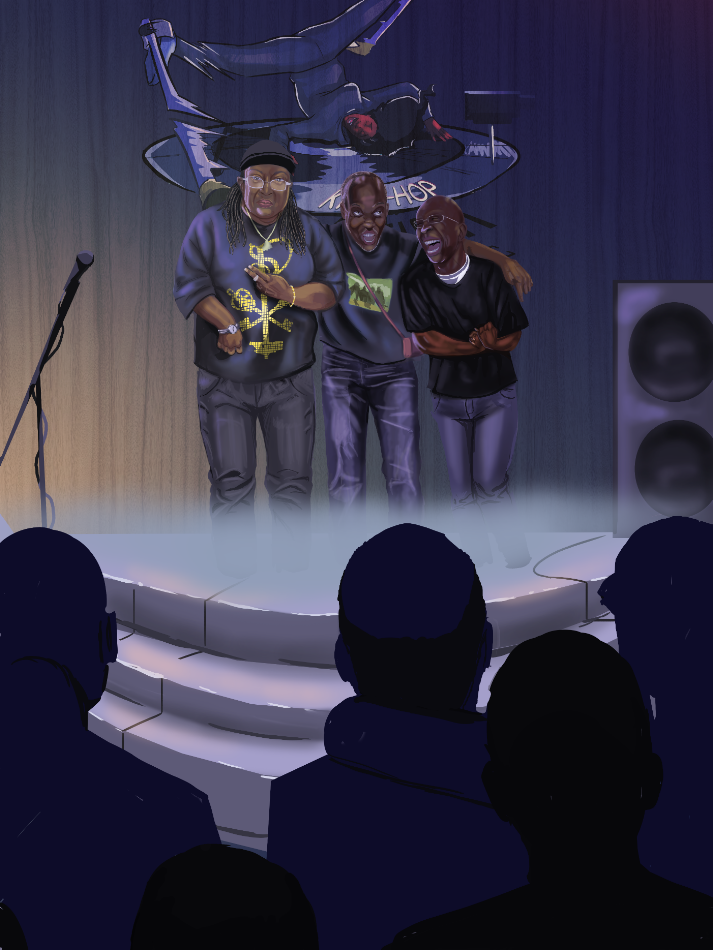 Krip-Hop Nation started with Leroy Moore, Rob DA Noize Temple and Keith Jones in 2007. I first met Rob face to face in his home studio in Brooklyn, NY. and we produced our first Krip-Hop song entitled, Krip-Hop. After we recorded the song, we talked about what will be Krip-Hop Nation. Rob told me about all the discrimination he faced in the music industry. He said. Krip-Hop Nation was like finally coming home. Before that first face to face meeting, we met online when I saw Rob’s statement on a musician’s website where he wrote a statement like call out to other disabled musicians to come together. So I emailed him and told him what I had in mind aka Krip-Hop Nation and this was early 2000 before I was apart of the creation of a three part radio series on disabled/Deaf Hip-Hop artists in 2006 at a radio station here in Berkeley, CA KPFA.

In 2004 I met the second co-founder of Krip-Hop Nation face to face after years communicating on MySpace at that time, there were no Facebook at that time. Keith Jones and I met when I was delegate at the Democratic National Convention in Boston, MA in the Fall. We were planning to go to the Disability Caucus at the DNC with other Black disabled local activists. After almost getting kicked out of the DNC, we ended up in a local recording studio dropping Keith Jones aka Fezo DA MadOne second CD. During the studio time and at the DNC we talked about Krip-Hop Nation and like Rob DA Noize Temple, Keith had stories of being discriminated against from record labels because of his disability. Keith loved the idea of Krip-Hop Nation when we met face to face back in 2004.

Although Krip-Hop Nation took off after I met Rob and Keith online and face to face, Rob and Keith never had a chance to meet face to face before Rob passed away in 2020. Keith and I as the two founders left of Krip-Hop Nation with approval from Temple’s family we will be creating the bi annual Krip-Hop $500.00 Award for outstanding art/activism under Rob DA Noize Temple’s name every two years on his birthday starting 2021. We want to call it KRIP-HOP/Rob DA Noize Temple Award for a disabled musician/activist to carry out his name and music.

Today in 2021 Krip-Hop Nation continues to build under a new home that Keith Jones have been building for the last twenty years called SoulTouchin Experience that just was approved to be a LLC with a media arm called Soulfull. Media Works and upcoming Krip-Hop media channel, Krip-Hop Institute and more. We are carrying out what Rob, Keith and I had talked about since our first face to face meeting and online communication throughout the years in 2021.

Rob DA Noize Temple, Leroy Moore and Keith Jones, The Founders of Krip-Hop Nation on stage with the Krip-Hop logo in the background with a speaker.
Painter: Ottis Smith